It has been a busy trip this year with lot’s of stops for just one night. Throw in lunch and dinner with producers and suppliers and it normally means that eating dinner is the last thing you feel like at 8pm.  However as I have mentioned previously, sitting down one on one is by far the best way to work together especially considering Australia and Italy are so far away, so the opportunity to do this is very rare. Most of the time just once a year!!

After leaving Parma we drove up to La Morra first for lunch and were craving a proper VPN Neapolitan Pizza. The go to Pizza place in the Langhe is Per Bacco in the heart of La Morra and the pizza’s did not let us down. We ate five pizza’s between three of us and they were as good as I have had anywhere outside of Naples.

From lunch we headed to Alba where I do a bit of business buying bottles from old cellars. It is always good togo and see what is available from the treasure chest of old Barolo and Barbaresco. Yesterday the cellars were full with many old bottle of Monfortino and Produttori available to buy.

It is crazy how time flies when you are on the go and before we knew it, it was 8pm and time for dinner at La Ciau del Tornavento in Treiso. This amazing restaurant produces some of the best food in Italy and last night we were not disappointed. At La Ciau we caught up with Paolo Saracco and Massimo Benevelli. Two producers that we represent with pride in Australia. Whilst sales of both these wineries have gone through the roof in the last year (we have just done our first full container between the two wineries!!) I know that they are happy regardless of sales, as it is more about relationships than sales budgets. When I catch up with Paolo and Massimo in Barolo or Barbaresco I know the drill: plenty of fantastic wine and lot’s of food! Last night was exactly that and we did not arrive back to our hotel until close to 1am.

After just quick stop in the Langhe (less that 24 hours), today we headed in Milano for lunch with our Australian shipping agent (Vito Bonino!!) who has been with us for most of our trip and our Italian contact. More on that later!!

In Piemonte there is no such thing as a casual dinner. Last night I met up with Massimo Benevelli and Paolo Saracco for a ‘casual dinner’. This dinner was held at Guido da Castigliole which is located inside the San Maurizio monastery.

The place of agnolotti
For half a century the undisputed benchmark for haute cuisine of the Langhe territory, the Guido da Costigliole restaurant is set in the ancient wine cellar of the San Maurizio monastery. Underground recesses and tunnels decorated with works by contemporary artists, this site holds a trove of more than 2,500 different wines, from Piedmont, France and the rest of the world. These wines have been collected over the years by Andrea Alciati, the young chef who picked up where Lidia Alciati left off, running the restaurant with Monica Magnini and Luca Zecchin and creating dishes that blend traditional flavors with modern fine dining skillfully using the region’s famed produce.The restaurant is open every evening but on Tuesdays it is only open to hotel guests. It can seat 80. www.guidosanmaurizio.com

It really has to be seen to believed. The restaurant and food was amazing. We drank old vintages of Paolo Saracco Pinot Noir matched against Burgundy and the Saracco held it’s own on all fronts.

Paolo and Massimo are very similar people. Both quiet and unassuming and do not talk for the sake of talking. They let their wines talk for them. 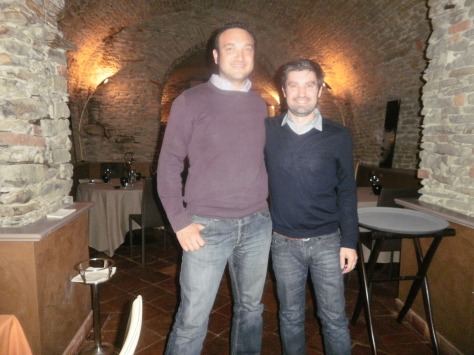 Maybe as a sign of the times in Italy, the restaurant was unusally quiet, with just a few tables being used and because of this, after dinner we had a tour of the cellars. I have never seen more Gaja or Conterno in my life.

Today after another ‘casual lunch’ with Paolo Saracco, I will head to Monforte to the cellars of Benevelli to try the upcoming vintages. 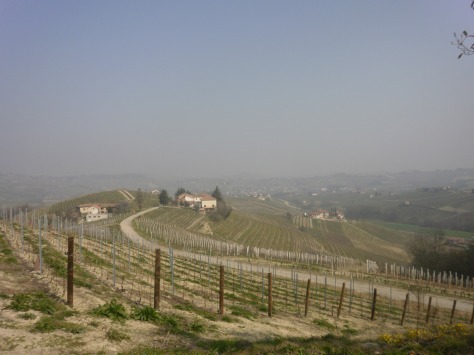 Today after lunch I left Milano to drive to the Langhe. For the next few days I am based at Paolo Saracco’s apartments situated in the middle of his vineyards in Castiglione Tinella. 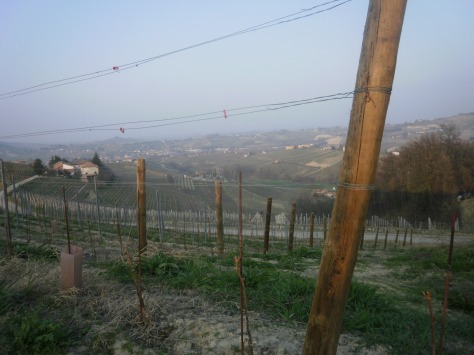 Not only is Saracco Moscato one of the best Moscato d’Asti’s in the world, they are also great people and have an amazing house (split into three apartments to rent). If you have a car it is well worth staying here. Click on the link: http://www.albergocastiglione.com/pagine/ita/casa-nelle-vigne.lasso 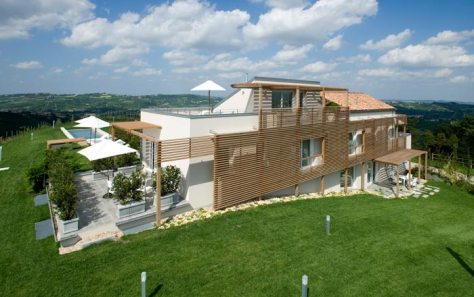 This afternoon I spent a few hours with my contact who supplies me my old Barolo and Barbaresco and tonight dinner is planned with the Saracco and Benevelli families. What a great way to spend my first night in the Langhe. 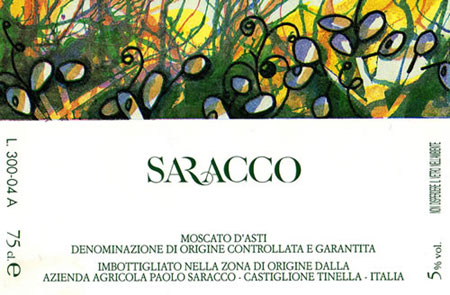 Paolo Saracco is known as “The Maestro of Moscato” and for good reason. His Moscato is perfumed with fresh peach, pear and white flowers, it has amazing intensity and an amazing palate. For two years, I have been speaking to Paolo Saracco and after Vinitaly this year, he offered to ‘Mondo Imports’ the chance to distribute his wines in Victoria. Who said you can’t have Christmas in July?!!