For the last fifty years, our family business interests have covered importing, retailing and making wines from both Australia and abroad. Over the last year, our retail outlet Boccaccio Cellars has been redeveloped and refurbished to try and showcase what we do across all our businesses.

Our store Boccaccio is names after the Tuscan Poet Giovanni Boccaccio and we thought we would honour him by a special mural painted on the entrance to our Continental Supermarket and Wine Store. This week this mural was completed and illustrates to people that they have walked into a pretty unique store.

In this group portrait, six distinguished poets and philosophers of the 13th and 14th centuries are shown as if engaged in a literary conversation. Each was revered for his role in the development of lyric poetry, which helped establish the Tuscan dialect as the standard language in Italy.The seated figure is Dante Alighieri (1265-1321), author of the Divine Comedy. Facing him is Guido Cavalcanti (about 1255-1300), acclaimed for his love sonnets. The standing figure in clerical garb is the humanist and classical scholar Francesco Petrarch (1304-74); to his right is Giovanni Boccaccio (1313-75), author of the Decameron. The figures at the far left are two authoritative commentators on their works, the humanist and man of letters Marsilio Ficino (1433-1499) and the platonic philosopher Cristoforo Landino (1424-1498/1504). All four wear laurel wreaths, symbolic of literary achievement. The objects on the table represent various scholarly disciplines. The solar quadrant and celestial globe denote astronomy and astrology; the compass and terrestrial globe, geometry and geography; the books, grammar and rhetoric. 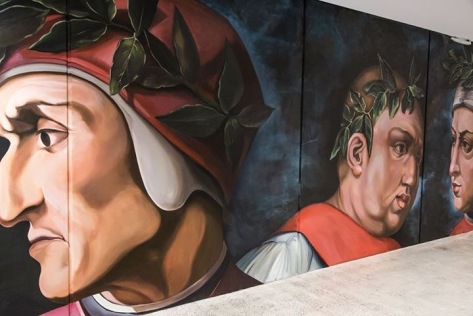 Our family has been busy building one of the best Supermarkets’ in Oz. Our new deli with our very own cheesemongers, Bernard and Gery is now open.

I think everyone knows about my love for Montalcino. Our Fratelli Brunello sold out overnight after this review from Campbell Mattinson.